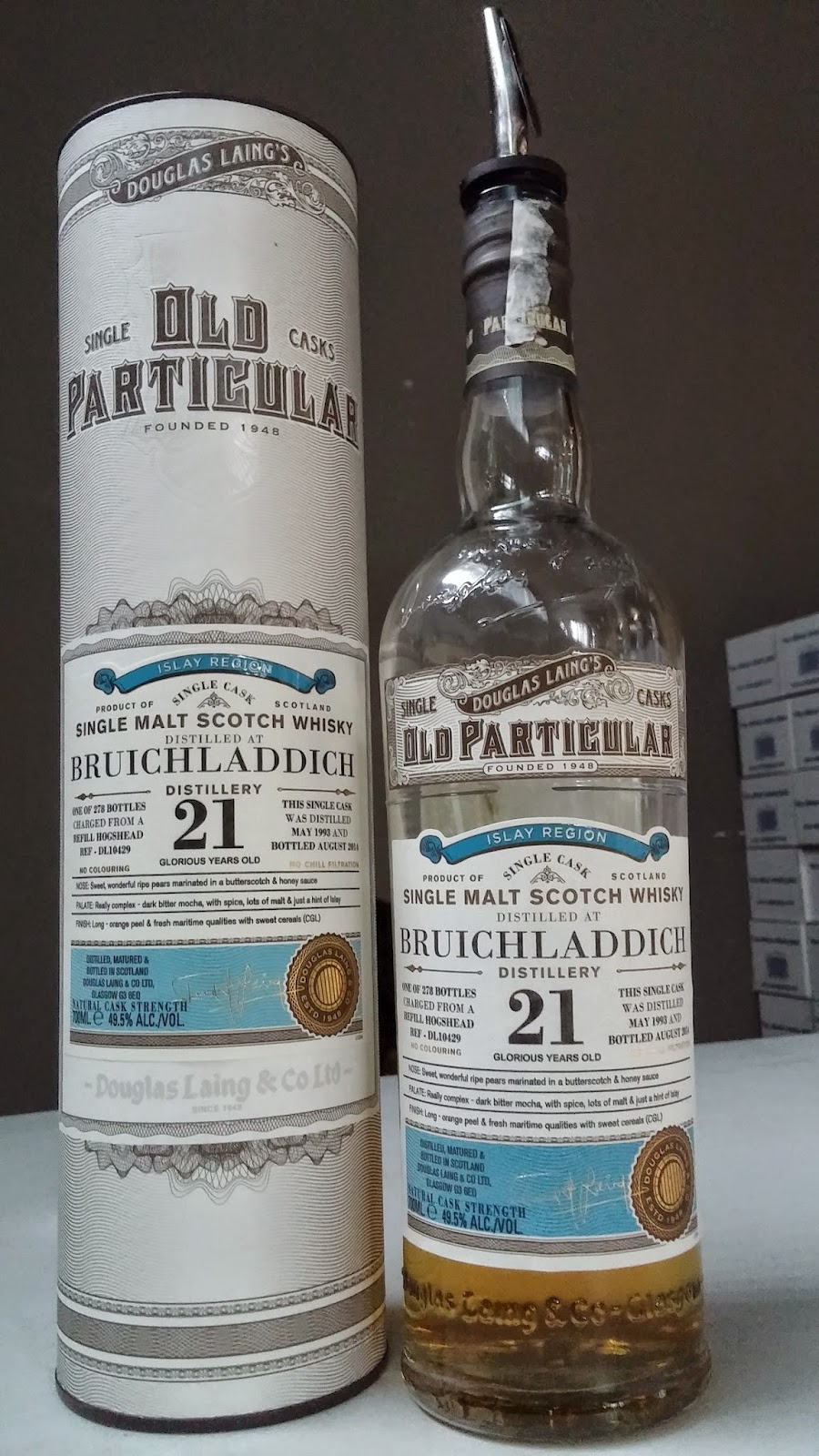 One of the 278 bottles. 21-year-old whisky, non-chill filtered, natural color,49,5% abv, spent its life in already used sherry cask No. DL10429. A whisky, produced by Bruichladdich distillery in May 1993 and bottled in August 2014. Imagine how old this whisky is, how many things happened during this period, not only in your lives, but in a global context. Up to the month of its distillation Bulgaria hasn’t yet been qualified for the World Cup in the USA in the significant 1994, the commentator hasn’t yet said the notorious phrase “God is a Bulgarian”, still no one would have thought that we’ll qualify for the World Cup, not to mention that we would be able to bring down Germans, Argentinians, Greeks and Mexicans…  It was exactly then when this delicious whisky was born.

And after this introductory pathos came time for a little history – that of the Bruichladdich distillery. It is situated on the island of Islay. That same island with the extremely peated whiskies. Regardless of its location, the distillery doesn’t produce only peated whiskies. There are also such with almost negligible levels of smokiness due to deposits of peat substances in the distillation containers. In the blog, I’ve already presented two peaty whiskies – Bruichladdich The Classic Laddie and Bruichladdich 17 y.o. single malt whisky rum cask, whose reviews can be found via the search engine in the top right side of the blog. The distillery was founded in 1881 by the members of the Harvey family – Robert, William and John, as the distillery remained family-owned until 1929 – the year when production stopped. On the other hand, the family has a story in whisky production /data since 1770/, which means only one thing – gained experience, which will be materialized in a quality product. In 1938 the distillery was sold to Hatim Attari, J. Hobbs and Alexander Tolmie for £23,000. In the following decades, the ownership changed several times, and in 1975 it was acquired by Whyte & Mackay. In 1995 it was mothballed again and in 2000 was sold to a consortium, under the name ‘Bruichladdich Distillery Co. Ltd.’, for £6.5 million /driving force behind the purchase was the independent bottler ‘Murray McDavid’/. The new owners decided to raise the distillery to new heights and for Production Director was appointed Jim McEwan, gained its experience on a similar position in the nearby Bowmore distillery. In 2001, the production started again. And so until 2012 when the distillery was acquired by „Remy Cointreau“, but this time for the sum of £58 million. And before I proceed to my notes, I want to mention that the distillery is known for that they are not using computers in the process of distilling and bottling the whisky. They have computers in the administrative offices, of course, but the activity is performed entirely by people. You can even track it by visiting the website of the brand, where there’s a link to the online cameras, installed in the building of Bruichladdich. I watched a little. Not an event that will overturn your life, but it seemed interesting to be noted.

The whisky I’m presenting today is part of the „Old Particular“ line by the independent bottler Douglas Laing and is offered under its name, as a few years ago the company purchased large quantities of whisky from different distilleries with the right to offer it under its own name. At the beginning of my statement I presented to you the specifics of the drink and therefore I proceed to my notes.

Aroma – „green“ and floral notes, green melon /not unripe one, but of those round and green, which are quite fresh and juicy/, green apples, wax and honey, chocolate spread, dark fruits, fruity liqueurness, thick caramel topping, fruitcake, woodiness, but considerably more moderate than that in Clynelish 17 y.o. Old Particular, which I presented a few articles ago, traces of dried fruits, a hint of black pepper, revealing spiciness. Since the liquid has a high alcohol content I added a few drops of water /but timidly – after all the whisky is aged and I wasn’t sure how much water the chemical bonds in the liquid can tolerate/. After the addition, the caramel and dried fruits strengthened, and appeared a memory of honey. Taste – dry, dried fruits, pepperness expressed in the form of nutmeg and black pepper, honey, sweetness and no trace of smokiness. With water – the whisky „soothes“, as the sweetness became a leading feature over the piquancy. Finish/ aftertaste – lasting, spicy, honey, nuts, sweetness, which appears later, a memory of dried fruits. With water – the fruits and fruity liqueurness stood out.
Assessment: 85-86/100. If I am not mistaken, the price is below 200 lv.
85-86/100BruichladdichDouglas LaingOld Particularscottish whiskysingle malt whiskyуиски ревюта 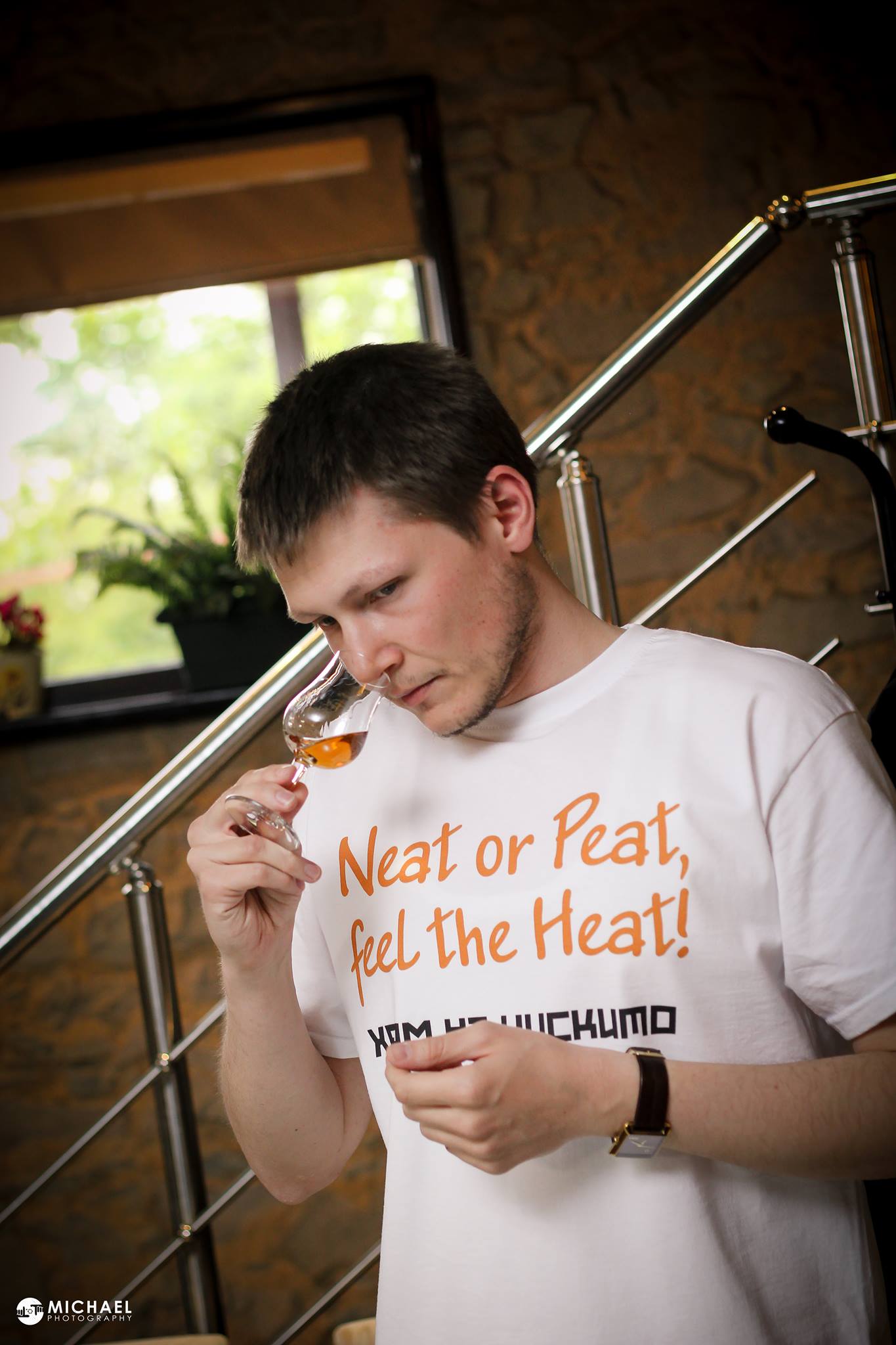